That Time NBC Made Me Hate the Olympic Trials, and Everyone Ever. 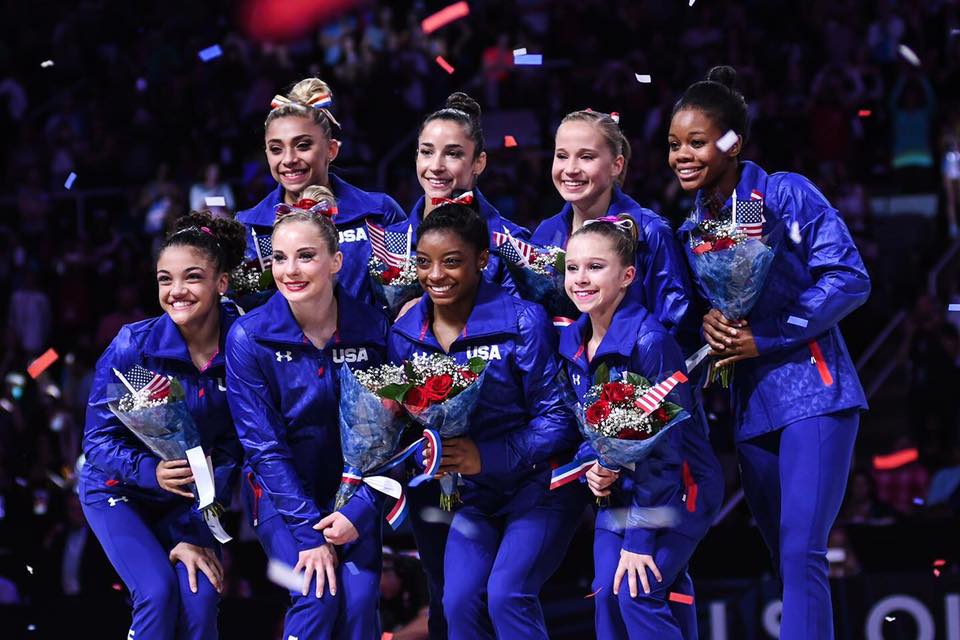 After the mind-numbingly horrible, awful, terrible, miserable, dreadful, appalling, miserable, horrendous, lousy, gruesome, and downright shameful Olympic Trials as broadcast by NBC, I knew right away that I had to write something.  OH, the rage that bubbled inside of me.  I ranted and raved to whoever would listen, (which was exactly one person, sorry Mr. Tampson,) and knew that I wanted, nay, NEEDED to write something.

I plunked my angry ass down and opened up my docs.  I was so upset, I didn’t even know what to write.  So I angrily stared.  I ruthlessly mulled.  I took a break for a snack, and then came back to stalk social media.

I took screencap after screencap of disgusting, hateful commentary from #fouryears and gymternet members alike.  “THAT’LL SHOW THEM!!!” I screamed silently as I irrationally pounded twelve Cherry Diet Cokes.  I gathered and edited photos, while simultaneously hand-writing down commentary, verbatim, gifted to us by the brilliant trio.  Really inspirational stuff.

Hours turned into days, leaving a largely blank screen to stare me in the face, taunting me as if I were the reigning Olympic AA champion, and NBC really needed to use me as a punchline to plump up their sagging, impotent ratings.

My seeming inability to form words certainly didn’t stem from a lack of material, what with privileged white girls passing around photoshopped USAG team pictures, using clever little monkey emojis.  WHAT COULD THERE POSSIBLY BE TO RANT ABOUT?

There are rivers and lakes and oceans of pure, unadulterated SHIT flying around the internet right now, and for me to pull more attention to that, to focus on the seemingly endless parade of hate, well, that seems NBC-level stupid.

There is enough stupid flopping around the gymternet right now.

Perhaps, what I’d rather do, is focus on wonderful, delightful, and inspiring events of the past weekend. 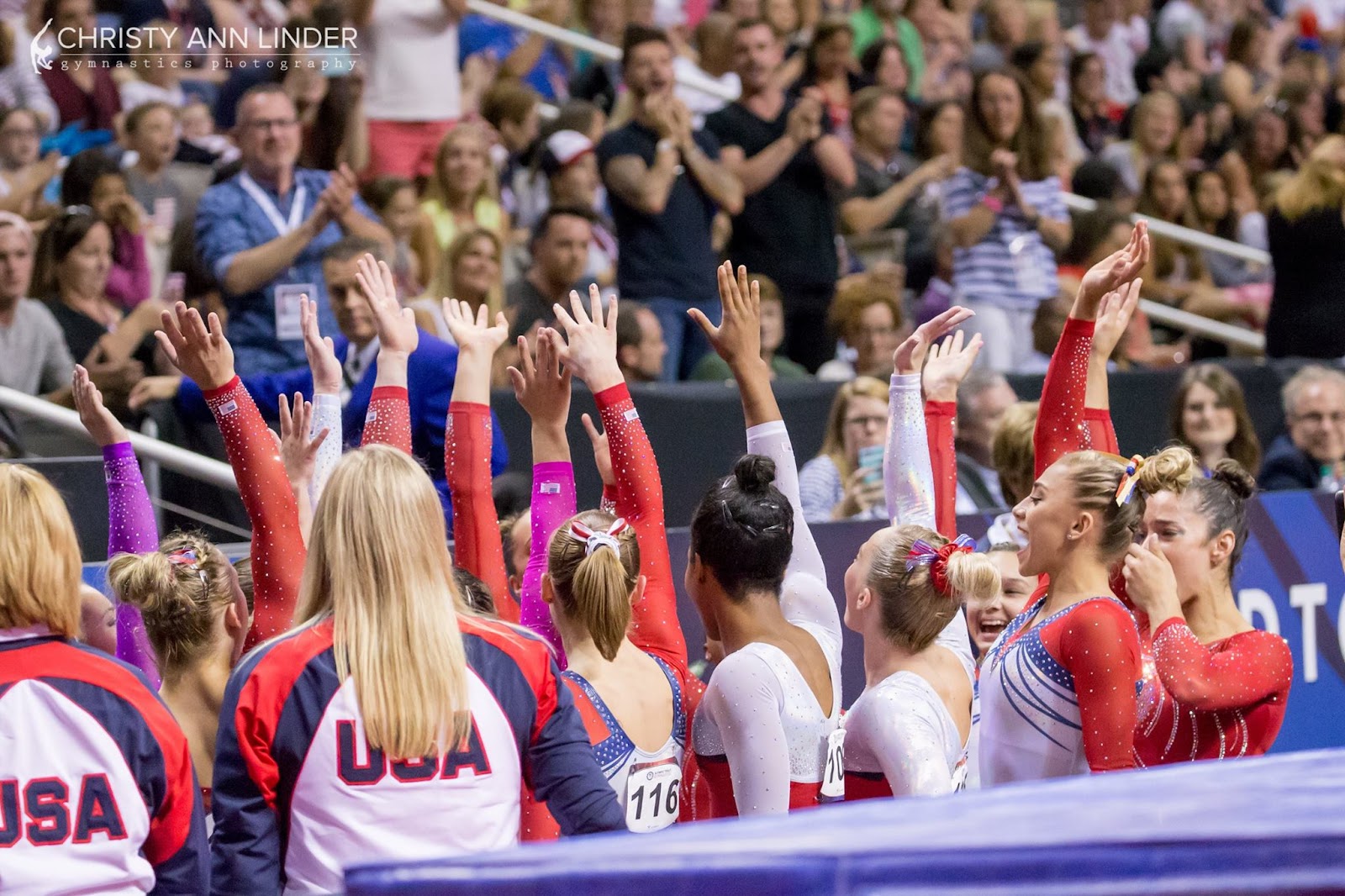 I will naturally start with the apparent source of the gymternet shitstorm, and the source of glorious shiny unicorn buttery popcorn in my heart- 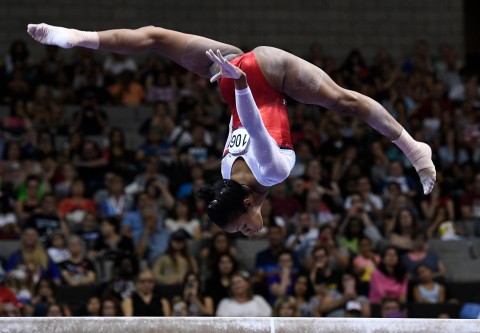 The Q. stands for Qualified to her second Olympic team.

There is so much talk of making history.  She made history once- can she do it again??

And yes, she made history when she became the first American Olympic AA champion to return to the Games.

So does she need to defend her Olympic title to make history?  No.  Chances are she won’t, and that is so, so OK.  She is a history-maker, and no amount of petty, Al Trautwig-level bullshit will ever, ever take that away from her. 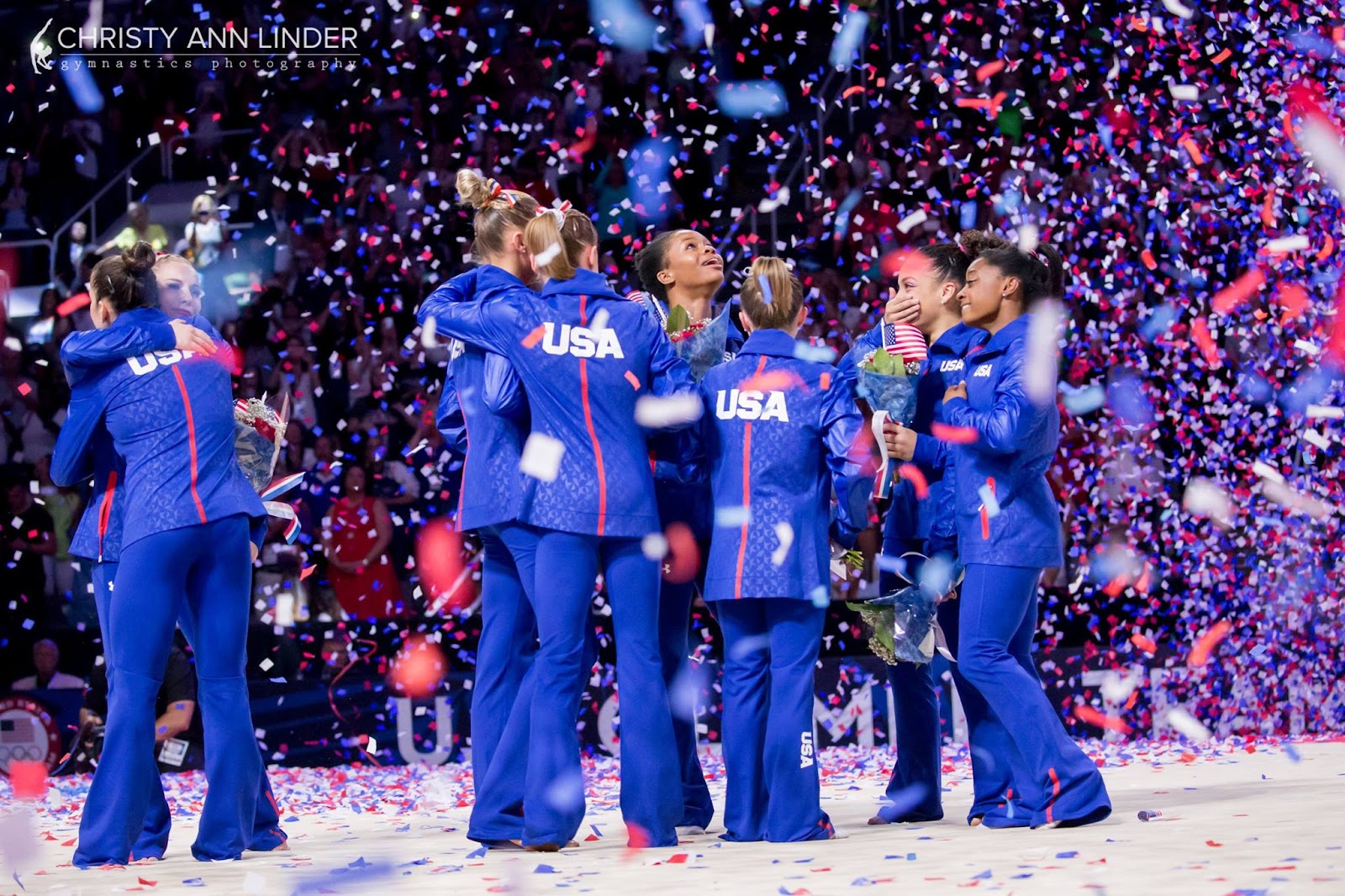 Look at how insanely happy they all are.  Well, maybe not so much Skinner.  But the other girls- thrilled beyond belief.  They worked their entire lives, and now they get to celebrate!  Well, not Gabby.  Gabby doesn’t get to celebrate the monumental feat of making her second Olympic team because she’s too busy being fed fistfuls of crap, being told she didn’t earn her place, doesn’t deserve it, doesn’t want it enough, etc and so forth.

Nothing on God’s green Earth bothers me more than the phrase “So and so deserves it!” as it pertains to gymnastics.  Let’s get real: anyone who dedicates such a wild amount of time and effort into the sport we love DESERVES it.  If life was fair, then every girl who ever went elite ever would get her chance to compete for the USA at the Olympics.  They all deserve it .  But we continue to assert that we, the public, get to decide who deserves to be rewarded for their work and who does not.

So I ask this: what exactly is the criteria that decides who deserves a coveted spot on the Olympic team?  Is it who has the most favorable leotards?  Whose eye makeup is the most “on pointe,” as the children say?  Do we choose those who stick diligently to the USAG media training script?  Or those who throw out off-the-cuff, unscripted remarks?  Do we measure based on who suffered through the most injuries?  Or by who had the least amount of drama?  Am I correct in assuming that social media content is one of the most important, if not THE most important selection criteria?

Being that these questions remain largely unanswered, at least to me, I have to wonder how people arrived at the conclusion that Dougie simply doesn’t deserve her spot.  It’s not like she layout flyawayed her spot onto the team.  She trained as many months, days, and hours as everyone else.  She sacrificed as much as everyone else.  Her talent, and results, are certainly up there with everyone else.  So what am I missing? 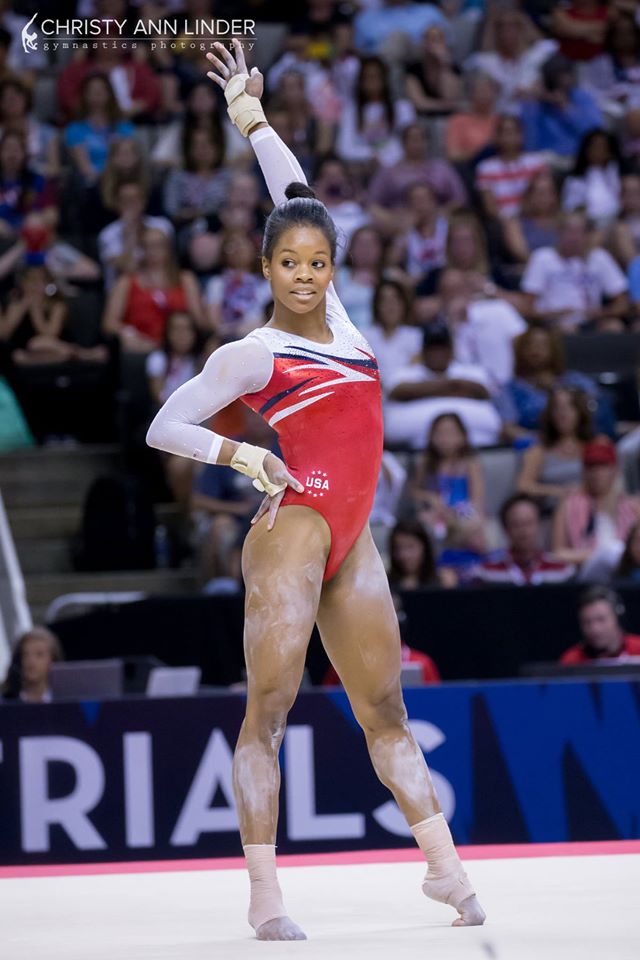 Oh, yes, that’s right.  I’m missing the fact that this world is stuffed full of life-ruining, soul-sucking, traffic nose-pickers who make it their mission in life to be the literal worst.

Being that these were the Olympic Trials, and as such, everyone was on the same side, and competing for the same team, I found it hard to understand why NBC, and therefore everyone else, needed to have a villain for this particular meet.  Aly was quoted as saying that Trials is arguably her favorite meet, because it is Trials and everyone is rooting for you, and celebrating your accomplishments.  It would be a true shame if someone didn’t get to experience it as such…

But let’s focus on someone who did get to have the meet of her dreams.  By all accounts, San Jose converted itself from the armpit of California into Laurie Hernandezville.  And I, for one, completely support this transformation.

Were her scores anywhere near the vicinity of reality?  Nah.  But such is the nature of Olympic Trials, even as far back as 1996, when scores were kept *just so* so as to maintain Moceanu and Miller’s supposedly precarious positions on the team.  Spoiler: they were in no way precarious.  Not then, not now, not ever.

History has shown us that when given even a slight chance to control the outcome of a team deciding competition, USA Gymnastics will pounce at the opportunity and shake the life from it like a three year old with a new balloon from Red Robin.  Burned by the forced “Place Top Two, It’s the Olympics/Worlds for You!” rule in both 2003/2004, Martha and Co. learned right quick that the only way to prevent accidental Meet-Of-Our-Lives-Itis was to hold certain scores down, and bolster the ever-loving-crap out of the others.

Clearly, what with Simone being Simone, there was no fear of some rando who wasn’t Simone winning that precious promised spot.  But what about those other spots?  Now, this may be news to some, but did you know that the top 5 spots at Trials are not automatically on the Olympic team?  I know!  THIS IS BRAND NEW INFORMATION.  And by brand new, I mean the way things have been since 2000.  But how can we still make sure that the girls we want on the team leave the meet with scores that will place them favorably in both the hearts of America, and the hearts of the Olympic judges?  Also maybe placing them fearfully in the hearts of competitors?

Let’s give them asinine scores.

Does it matter?  Nah.  When your grand puba has to go on record saying “We have our own judges doing our own scores,” then mayyyyyyybe we don’t have to take the posted scores all too seriously.

But whatever.  The awesome part was when the entire thing comes down to the final routine of the night, and it’s Laurie Hernandez on beam.  Now, for drama’s sake, let’s pretend she wasn’t already on the team in May.  Let’s pretend that she needed to nail this one beam routine in order to achieve her dream, and make the Olympic Team.  It was her Amy Chow moment, if you will.  The arena is silent.  She mounts.  She pounces and flits her way through a routine one can only consider divine.  She dismounts to thunderous applause.  These are the kinds of routines that motivates 8 year old gymnasts for generations to come. 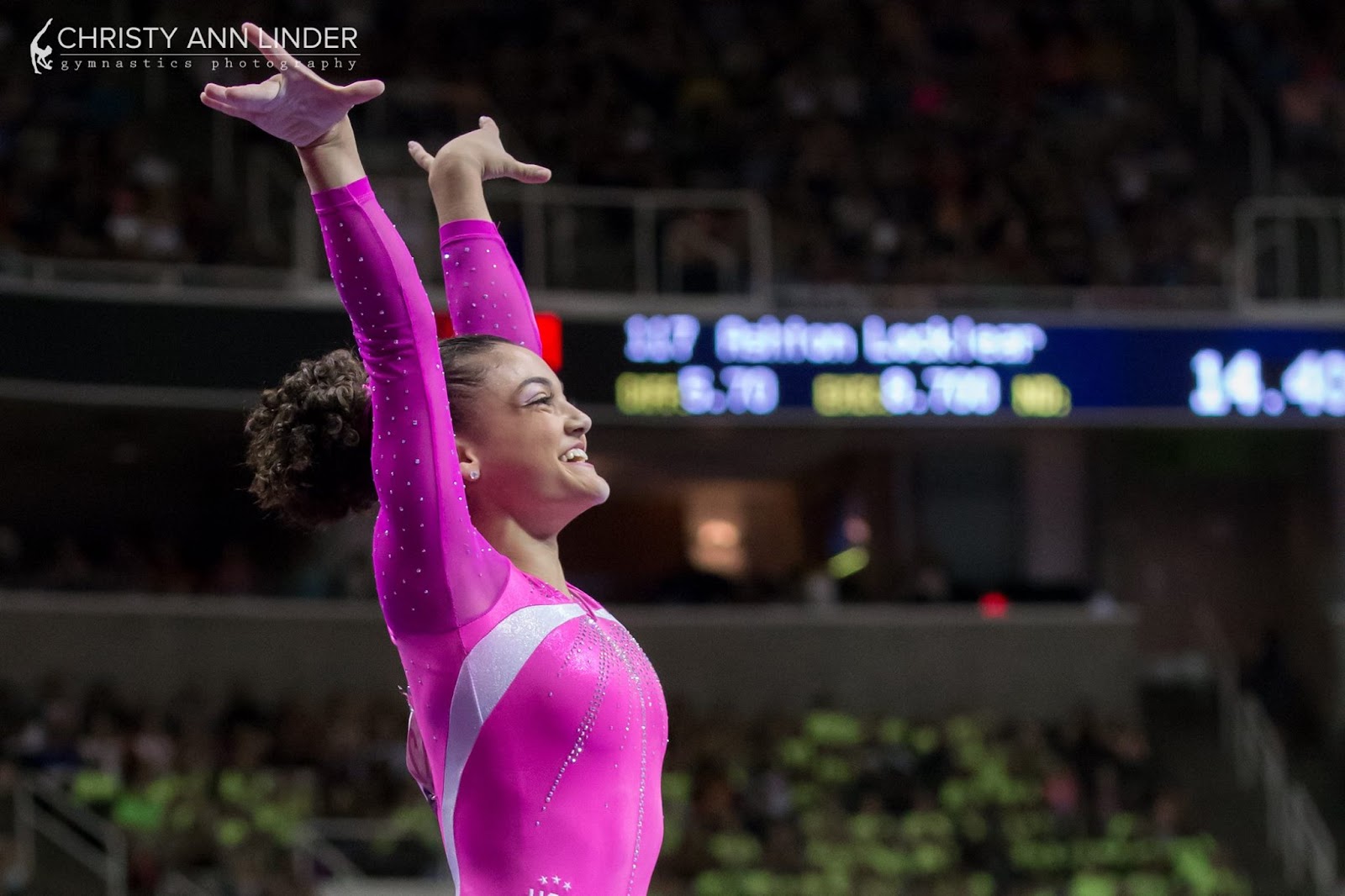 I do feel the need to go on record saying I kind of despise both the nicknames “Baby Shakira” and “The Human Emoji.”  Like… what even?  I don’t even know where Shakira comes from, is it a hips thing?  And oh, a teen has emotions amongst the robots, GET OVER IT.  She is worthy of much more dignified monikors.  This will be the Flying Squirrel of our time.

I want to talk about Maggie.  I don’t know what to say about Maggie.  I love Maggie.  I am gutted for Maggie, and yet, I understand.  Not the alternate snub, I don’t understand that at all.  But what a way to go out.  And just such a classy, classy person and gymnast.  One can only hope that every gymnast who gets the short end of the stick, or ever ends up just short, can do so with the level of class of one MAagagaagagaguegdhj Nichols. 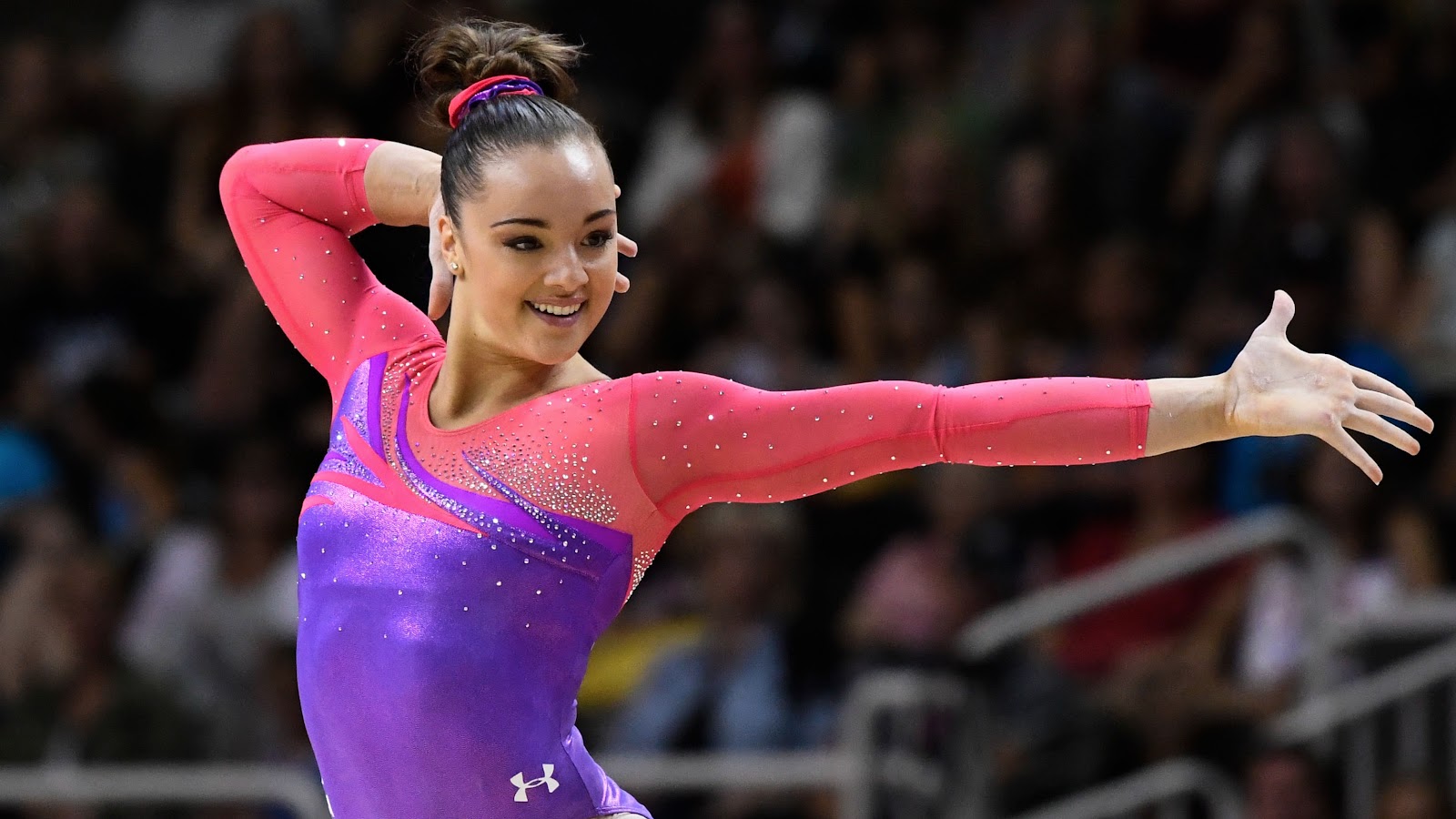 I want to talk about Amelia Motherfudging Hundley.  Now, I wouldn’t know for certain, because NBC is the embodiment of a dog shitting against a wall, but I’m told Meels had basically the best meet of all time.  Word on the street is that MLT had been keeping her distance from the underdog, which can only lend itself to Amelia’s brilliant showing. 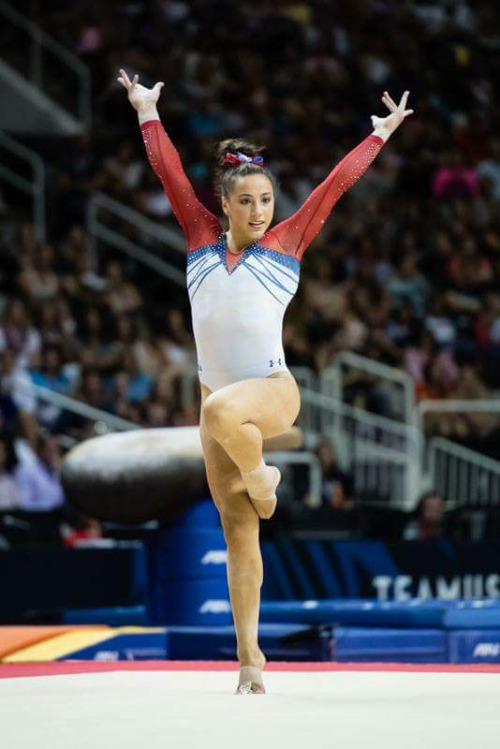 There were other moments, sentiments even, that I take for granted.  Simone, among historic expectations, solidifying her spot.  I mean, we all knew she would.  Of course she would.  There was literally no way in Nastia's Pink Polo hell that she wasn’t going.  But despite all that, she still had to go out and do the thing, just like every other girl out there. 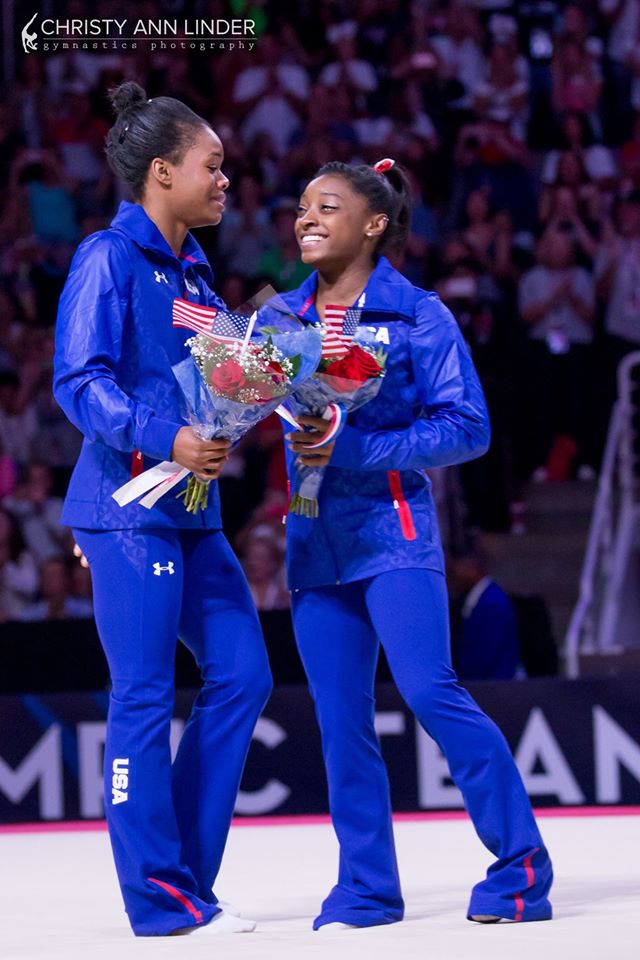 I also very much tend to take Aly’s Banana RePatterson performances for granted.  It’s so expected, that if she doesn’t perform to her abilities, at least in the team portions of major meets, it comes as a MASSIVE shock.  We trust Aly Raisman to go out and nail her shit because that’s her thing and that’s the thing she does.  And on the cusp of making her second Olympic team, she did it.  Again. 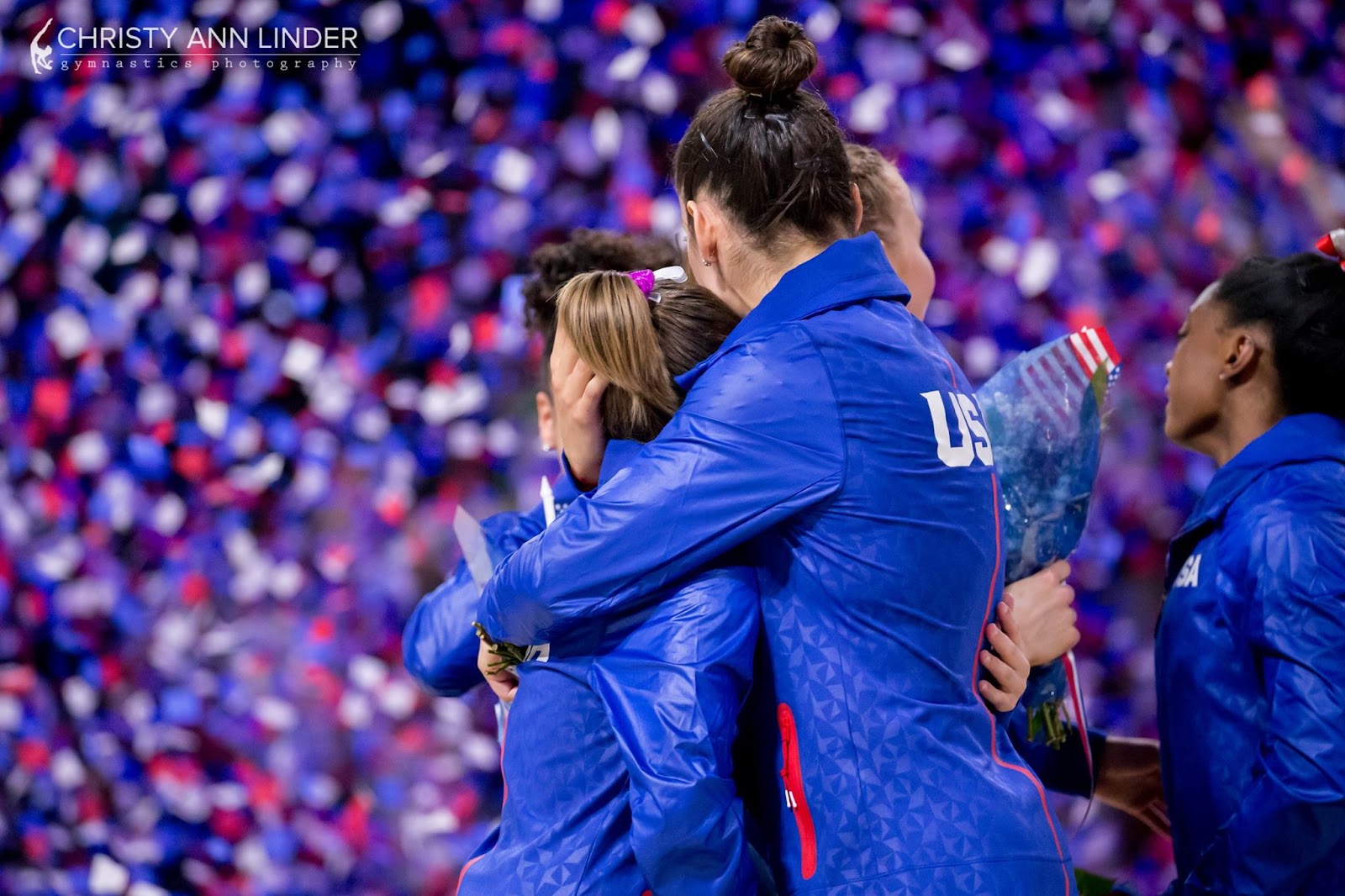 So, in spite of NBC’s valiant attempts to Donald Trump the meet, and divide the gymternet, each and every one of the competitors proved that our particular gymnastics world is not all doom and gloom.  Our media, and ourselves at times, can be complete shitbags, but the athletes continue to be beacons of pride, and of the Olympic spirit, that this world sorely needs. 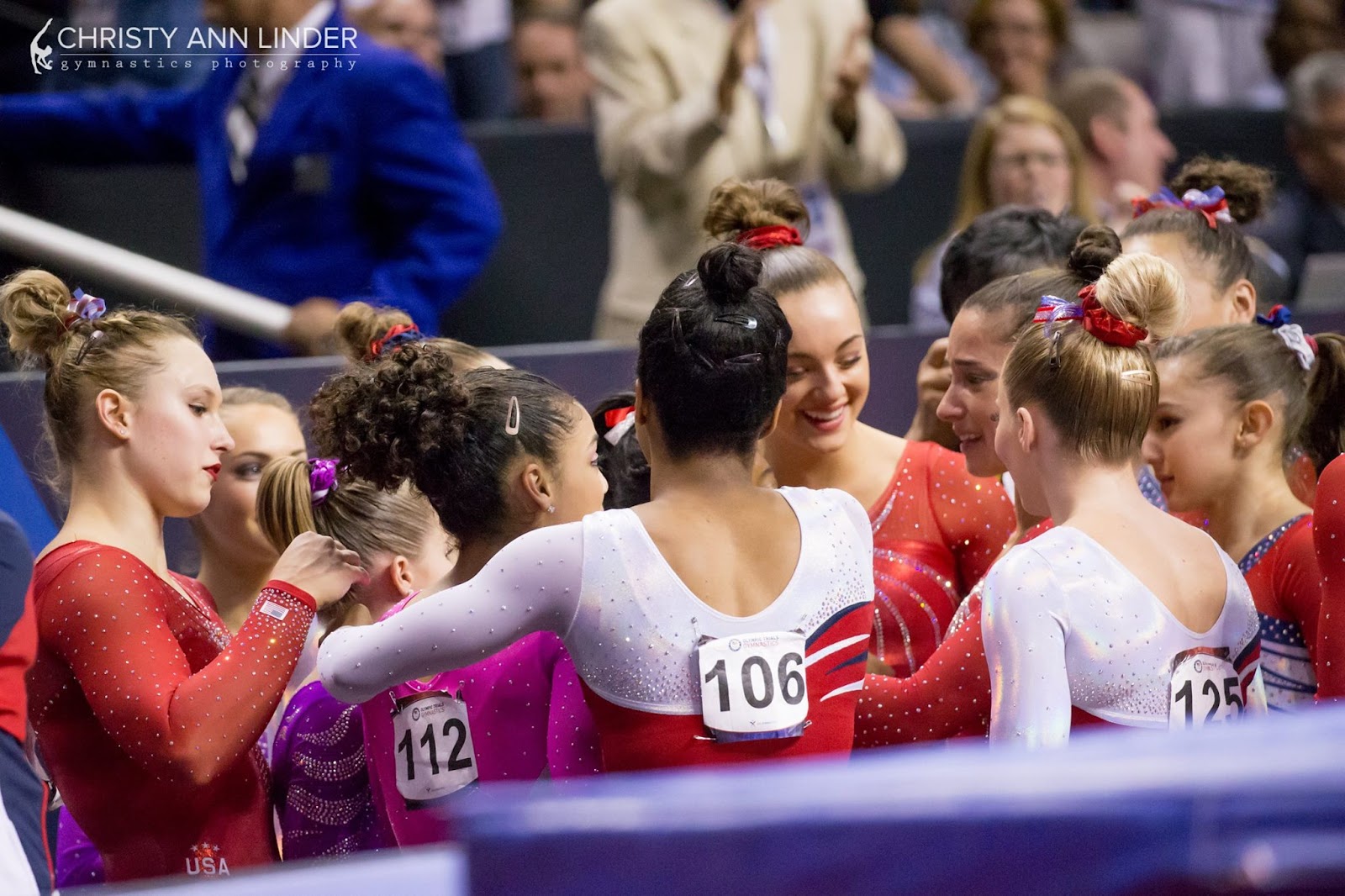 Most of these stellar pieces of photographic glory are masterfully taken by Christy Ann Linder.  She is the Simone Biles of gymnastics photography.
as told by Spanny Tampson around 10:14 PM