I'm fully aware that Thanksgiving was last week, but for this scatter-brained mom, five days late isn't that bad!  I haven't showered in a week.

Anyway, OMG, Thanksgiving!  Let's post about all the marvelous things we couldn't live without.  Psyche.  That's not how I roll.

WHAT I AM MOST CERTAINLY NOT THANKFUL FOR 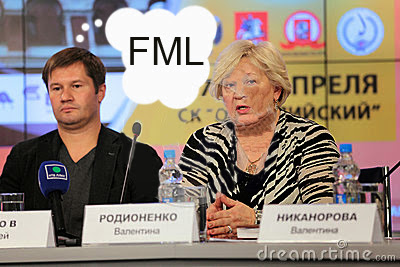 This basic bitch.  What is her deal?  She makes Martha seem like the Taylor Swift of gymnastics regimes.  Mustafina sucks, she will win zero medals.  Everyone is too fat.  Peace out, best coach we have.  Pavlova can't vault for us, instead, we'll offer you some Nabieva.  Enjoy. 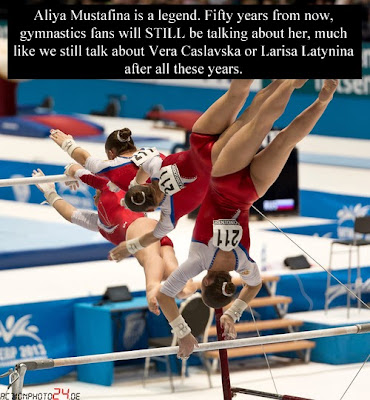 I'll admit, it took me a few years to get on board with her because her batshit crazy gymternet fans clouded my usually impeccable perception.  However, her performance in London reminded me that she is so much more than some nutso fandom.

That said, the Mustapologists still have a LONG way to go.  Yes, she's a remarkable gymnast who will likely be remembered by the community for a very long time.  Yes, she did comeback from a garish knee injury that we all called months before it happened.  Yes, she has this uncanny ability to suck every ball during prelims, and then wipe the floor clean during finals.  Such is the Mustafina.  Learn it, love it.

But never in my life have I ever seen a gymnast more obsessed over.  This is coming from a girl who owned multiple Dominique Moceanu tour T-shirts.  You guys need to CALM THE FUCK DOWN.  She is an incredible competitor, and has a presence not seen since Boginskya, but she's a human, and you probably don't need to lose your damned mind if she doesn't win, or if, heaven forbid, she has a boyfriend.

Which leads me to my next topic. 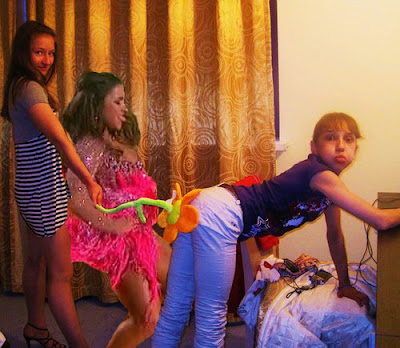 Yup, it's creepy.  There is nothing anyone can do or say to make me believe that it isn't creepy.  I understand reading erotica.  I read 50 Shades of Grey.  However, 50 Shades wasn't written about real people, let alone real teenage girls.  Real teenage girls who love social media and are very capable of searching their own names on Tumblr and reading pornographic stories about themselves, more often than not featuring a lover of the same sex from a different country.  Then, the people who write these stories go bananas when they learn that the very same teenage girl who loves social media who they've been writing erotica about has a boyfriend. 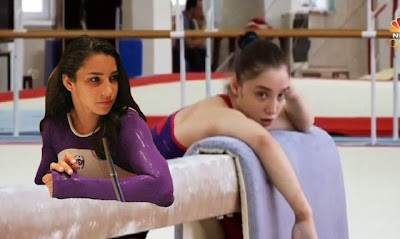 Luckily, slightly older women like Aly seem to understand the joke, and aren't horrified by it.  But for the younger kids?  What a sucky thing to worry about.  Ho hum, I'll just google myself, as one does.  Oh.  Says here I'm in a graphic sexual relationship with a 16 year old that I have never met.  I hope my dad reads it. 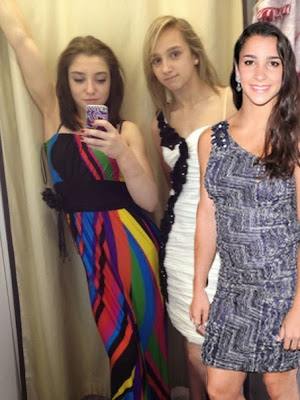 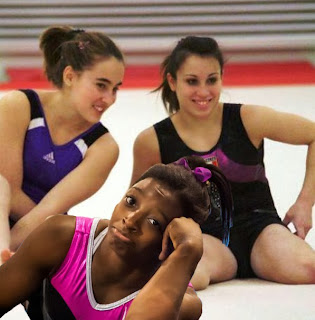 So much has been said about this super classy young starlet's commentary.  I don't really care about social or European differences.  I care that Carlotta, and to a lesser extent Vanessa, are seemingly unable to put on their big girl panties and accept their repeated defeats.  You want to know why Simone beat you?  She's better.  Move on. 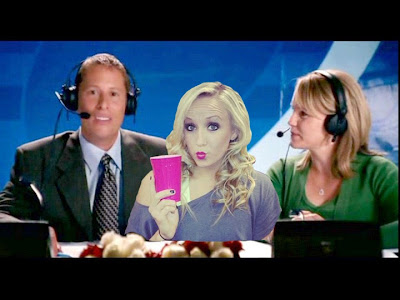 I think what bothers me about this is that the potential is there.  An Olympic champion who is not very far removed from her competitive days (or is?  Does 2012 count?) should be able to provide a wealth of information for both the Housecoat Sallys AND the hardcore gym fans.  Sadly, it is not to be.  Instead, Nastia literally repeats what my BFF Timothy Q. Daggett says like, thirty seconds after he says it.

BFF Timmy:  She's actually capable of doing much harder difficulty than this.

NBC Nastia:  *30 second pause* Did you know, she's actually capable of doing a harder routine than this? 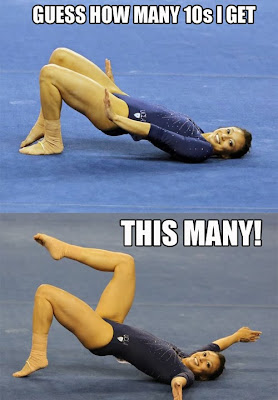 Don't get me wrong.  I love UCLA, and I love Zam.  I'm human, after all.  But the Zam Bonus, or the ability to wobble here and there and still magically score a 9.95, was a tad egregious this past season.  VZ is a terrific gymnast, but as far as I remembered, bending at the hip and extra steps on dismounts were deductions, no? 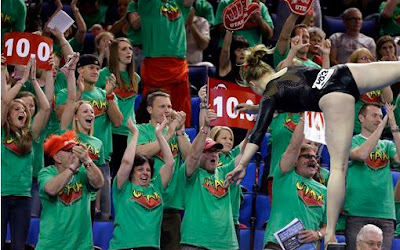 Oy.   Every team was the beneficiary of some home-cooking this year.  Such is life.  Death, taxes, and massive home overscores.  But Utah really stepped up their game this year.  It was embarrassing.  198.800's for everyone!  Oh, you bent over 90 degrees?  That's cool, it's artistic.  Wonderful choice. 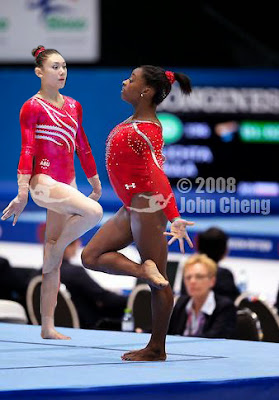 The FIG really screwed the pooch on this one.  In theory, it works.  IN THEORY.  In theory, a gymnast doesn't spend 15 seconds panting in the corner (read: Mustafina) and instead, artfully launches into her pass.  Instead, a gymnast spends time panting in the corner, but while standing on one leg.  Or facing the other direction.  It also seems like a huge safety issue for me.  I don't like the idea of racing into a tumbling pass short of breath.  Grandi probably loves it. 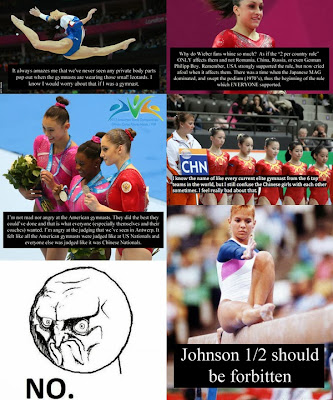 I don't even know what to say about these.  It really brings the collective IQ of the gymternet down by about a thousand points.  Maybe I'm just old.  That's it.  I'm old.  I'm so old and curmudgeonly that these make no sense to me.