The Amanar: a Breakdown

The Amanar.  The Scamanar.  The Nabievanar.  The Maroney.  So many names, one single vault.

The vault du jour is of course, the one and only Amanar.  Without it, you're screwed.  Good thing everyone on the planet is trying one!  But who does it best?  Let's discuss. 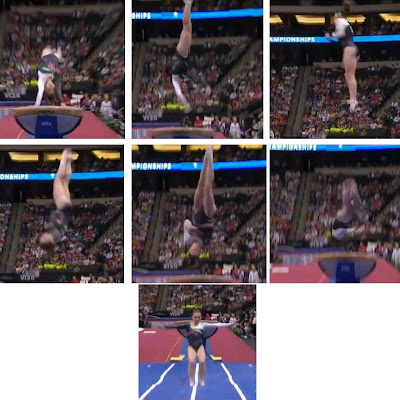 Height, form, perfection, glory.  But who, if anyone, comes close to Maroney on vault?

Now, as of this morning, these were all currently competing gymnasts. 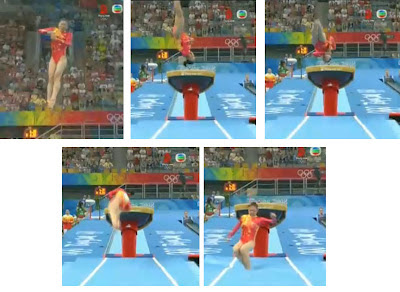 Let us reminisce about what once was.  Sigh.  They just don't make them like that anymore. 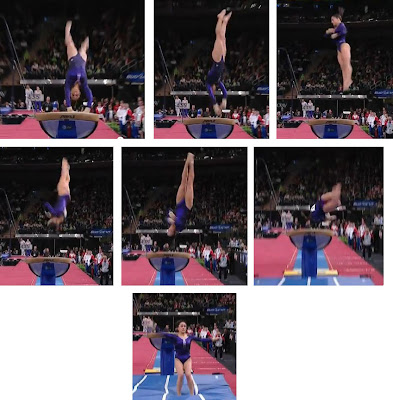 People give this vault a hard time, and I just don't understand why.  In one million competitions, I've seen her land wrong twice: once when she was 13, and then once last weekend.  Granted, those landings were terrifying.  Still, I don't think that puts her on the endangered Amanar list.  She doesn't get the pop off of the table that Maroney does.  That will never happen, so get over it.  I have yet to see an Amanar with tighter form.

Next is the divine Lady Douglas. 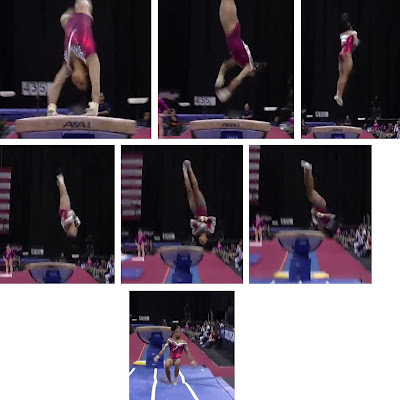 This was not her best outing, but it was the only time they've shown her vault from this angle, so use your imagination.

Dougie has that special brand of Chow vaulting.  It's not my favorite.  As shown, she twists so early, which combined with her wonky round off technique adds up to one iffy vault.  THAT SAID, she is the Lady, so her vaulting automatically appears to be more acceptable to me.  Her legs stay straight, for the most part.  I like that.  I do think though that as she grows, she will need to find ways to get this vault around other than spinning really fast. 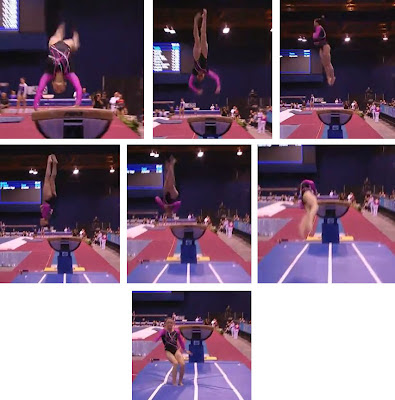 Oh Kyla.  This vault is... interesting.  I have yet to see a non-terrifying version of it.  Fun fact: you don't get bonus points for dismounting the landing mat.  Someone should let Howie know.  Positives: she gets a good bump off of the table, and doesn't resort to tucking her body to make it around (more on that later.)  A little crossing of the legs, yet it's not egregious.

And then we have Aly. 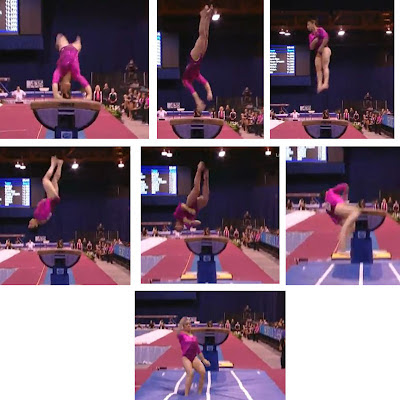 It's a tucked vault, she doesn't make it all the way around, and yet she still seems to score well.  This is where the judges fail us.  Like with her Russian counterparts, the judges fail to score these deathtraps accordingly.  Aly is lucky that she's built like an ox, which is helping her stave off injury, for the time being.  But it won't last forever.  I feel the same way watching Aly that I did with Mustafina.  It is an injury waiting to happen, and instead of deducting accordingly, the judges are rewarding this risky behavior.

And did I mention that the vault is seemingly tucked throughout?

This is in direct comparison to former world champion, Aliya Mustafina, who famously blew out her knee doing this exact vault. 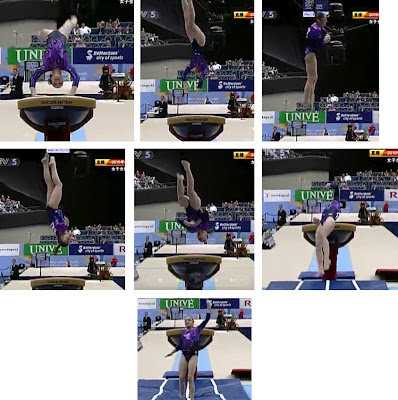 They are almost, frame-for-frame, the same vault.  Aliya gets a little more height, which misleads people into thinking that the vault is acceptable and safe.  It is neither.  Had she ever been judged accordingly, I would see this vault for what it was, serviceable, but an injury waiting to happen.  But for whatever reason, the judges seem hell bent on scoring vaults like this one, and Aly's, as if they were Maroney-esque.  They are not.  The judges fail the gymnasts, and the sport, when they allow dangerous vaults like these to score well.

Of course, one cannot talk about dangerous knee busting atrocities without mentioning the legendary Tatiana Nabieva. 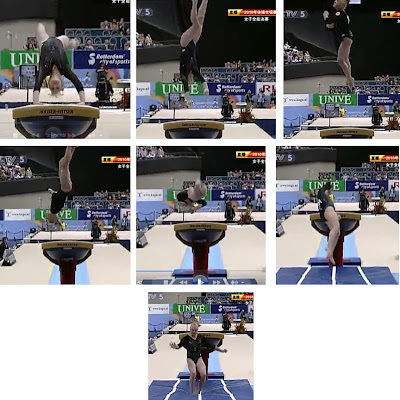 It's a conundrum, because I was raised in a world where Soviets, and then of course Russians, did every skill beautifully.  They were NOT chuckers, no sir.  And now... this.  It's upsetting.

I was pleasantly surprised when we saw a relatively simple DTY from Viktoria Komova last year as opposed to her Amanar.  All reports had her chucking vault after vault, but failing to land them in training.  So she went with the well-performed DTY, and for that, I give her and her coaches credit.  Now, a year prior, Komova actually did have a lovely Amanar. 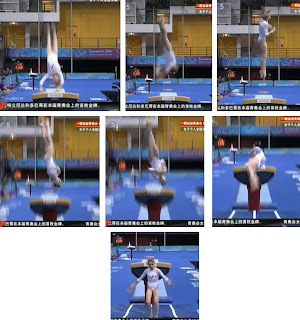 Now, the dynamics were not the best.  I believe this vault was possible due to her size and speed.  She has since suffered a growth spurt (Suffered is the wrong word.  I wish I grew the way she did.)  It has yet to be seen whether or not her Amanar will resurface.  Russian artistry trolls would have you believe that as many as five Russians have trained and mastered the skill, and will be scoring 16.4 on all of them come London.  We have yet to see one.  One of two things will happen in London: We will see three beautiful and high scoring DTYS, or we'll see some horrifying chucked Amanars.  Of the potential Russian vaulters, Komova is the only one I would care to see perform the upgraded vault, if it is safe.  Not at the cost of her knees, however.

So, here's to the vaulters.  Don't have an Amanar?  Sucks to be you.  Good luck surviving in gymnastics.  Unless you are Alicia Sacramone or Oksana Chusovitina, in which case you can do whatever you want.
as told by Spanny Tampson around 9:33 PM