The Patterson: a Breakdown

The Patterson.  A difficult and innovative skill, this dismount is like the souffle of gymnastics: when done right, it is a true delicacy.  When done wrong, you want to kill yourself.

Let's start with the master of the skill, Miss Carly Patterson herself.  It was her namesake, her trademark, and it clinched her Olympic win.  Let's discuss. 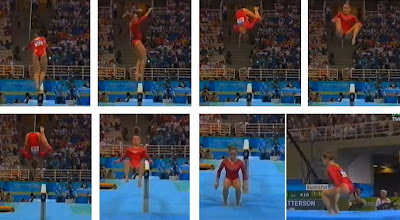 *click to enlarge, you're not stupid and already know that*

Now, it must be noted that Carly did her dismount out of a roundoff back handspring.  The back handspring allows her to keep her body square as she pushes off for the arabian.  She gets a significant amount of height off of the beam before initiating the twist.  The cowboy position leaves a bit to be desired, unless you're a pervert, but most of the girls show the same level of cowboy in their Pattersons.  (OK, that really sounded bad.  Get your head out of the gutter, assholes.)  She is still at beam height when opening up, which allows her plenty of time to really prepare for the landing.  Even with the intense momentum she generates, she doesn't need a super deep squat to absorb the landing. 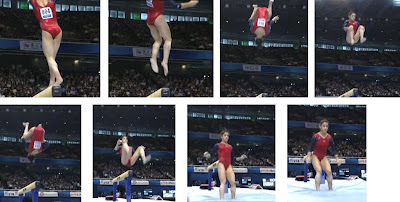 Aly Raisman is another high profile example of a good Patterson dismount.  Unlike Carly, Aly uses just the roundoff to initiate her dismount.  This presents the opportunity for her to cheat the dismount and twist too early, at the end of the roundoff.  Fortunately, she doesn't seem to take this opportunity.  Like Carly, she keeps her body square to the end of the beam, and gets a good set before she starts the turn.  She cowboys a tad, but has plenty of height when she opens up for the landing.  This is a dismount I have never seen her miss, and I never worry for her life. 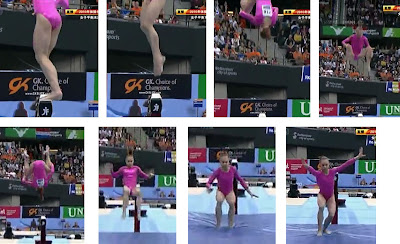 Like Aly, Becca chooses to do her Patterson out of a roundoff.  However, unlike Aly, Bross always seems to initiate the turn in the roundoff, so she her feet would land almost sideways as opposed to square with the beam.  Instead of a half turn into a front tuck, she seemed to do kind of this sideways flip into her front tuck.  It's bizarre.  Despite the wonky takeoff, Bross manages to get huge height off of the beam.  Like the rest, there's a bit of a cowboy, and Bross isn't as high as Carly or Aly when she opens up for the landing.  Despite that, she manages a good solid landing.

One wishes Bross always did her safe, clean Patterson, but alas, it is not to be. 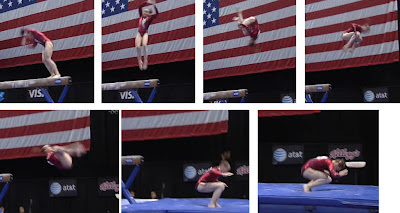 Unfortunately, we see way more of this cannonball type of dismount than we'd care to.  It's easy to forget that Bross has ever done a decent Patterson, and demand that Valeri pull it from her routine.  But isn't that what we love about Becca?  She doesn't seem the type to water down, even at the cost of her knee or our sanity.

Notice again how early Bross twists, before landing her roundoff.  Instead of reaching up and back behind her to set for the dismount, she reaches up and to the side.  She doesn't get anywhere near the needed amount of height off of the beam, and as a result is still holding that delightful cowboy position until she is well below the beam.  Now, this is when her dismount goes one of two ways.  She opens up too early, and jams her locked-legs into the mat as hard as humanly possible, and ends up falling backwards.  Or, she holds on to the tucked position for an eternity, and ends up diving to her face.  So she gets to choose, either a busted ACL, or a knee cap to the eye socket.

Another athlete with a seemingly 50/50 hit ratio is Viktoria Komova.  Her low stats seem more a result of not competing the skill often enough, but there still is a little gnarly technique.  I haven't seen her compete it much at all, but for the sake of argument, I picked a recently landed dismount.

Komova's is tricky.  Even though she does a roundoff back handspring into the dismount, she twists before her feet land at the end of her BHS.  So, like Bross, she is facing the side as she takes off of the beam.  This limits the amount of height that she is able to generate from the set, which all contributes to her landing the dismount lower than she should, and inevitably catapulting herself forward.  It's intriguing, however, that she seems to have more height on the second salto than she does the first.  So what do I know?

These two garner far less attention than those mentioned above, but both Kytra Hunter and Yulia Lozhechko had perfectly serviceable Patterson dismounts. 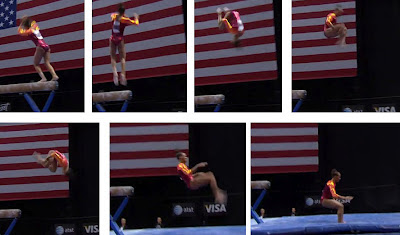 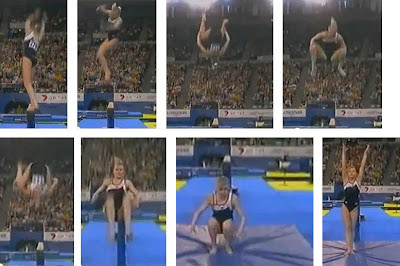 I know Courtney Kupets also competed a Patterson at one time, but I could only find one video and the quality was super shitty, so you'll just have to use your imagination.

So there you have it.  The Patterson.  Another beautiful skill that has high potential to be a complete knee buster.
as told by Spanny Tampson around 7:23 PM