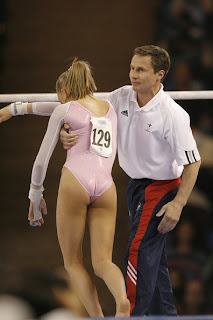 2012.  The Olympic year.  Everyone's favorite time of life.  People are excited, I get it.  Man, do I get it.  However, I still feel the need to remind the world about having realistic expectations.

Let me start by saying that Nastia Liukin's comeback is/was exciting.  Of course it was exciting.  Not since 1980 has an AA champion even tried to make the following Olympic games.  She will always be legendary to the gymnastics community, and nothing will ever change that.  Even 11th hour comebacks.

When it comes to all of these comebacks, my philosophy has always been "I'll believe it when I see it."  In fact, when it comes to most skills or upgrades at all, I don't count my chickens before they've hatched.  When I see it, then I will consider it.  This goes for Russian Nabievanars, double Y turns on beam, triple twisting yurchenkos, and 7.2 uneven bar routines.

So like, Alicia, Chellsie and Shawn before her, I refused to get too excited about any planned routines from Nastia.  Hope for the best, expect nothing.

Clearly, the internets do not share my same philosophy.  If I had a dime for every time I read a predicted team lineup with Nastia anchoring bars and beam in London, I'd be richer than Miss Prada Backpack herself.  But that's cool, it's fun to predict teams, whether they're feasible or fun or just full of all of the really pretty gymnasts that you want to see do beautiful gymnastics.  It's the Olympic year!  Why not.

After months and months and months of tweeted pictures of grips and rips, we got a tiny snippet of video from training at WOGA.  And she looked great, considering this was the first time we had seen her do anything competitive on bars since 2008.  It was a treat.  Even though we saw selectively edited pieces of her routine complete with heavy Valeri involvement, the tittering began.  Nastia was back!

People began to tentatively place Nastia on uneven bar podiums in London.  It would be hard to top Aliya or Beth, but with Nastia's planned 7.5 routine, she could be right up there.  And at least we know her competitors for gold are sixteen, amirite?

The next big fuss was during podium training for Classics.  I refuse to call it the secret anything.  Those present, and then the rest of the world (thanks to USAG!) were privy to a couple of half routines, even though Nastia wasn't planning on competing the event that weekend.  Who cared, because we got to see Nastia do real life bars, and it looked good!  The internet didn't need to see a full routine to know that Nastia was essentially a lock for the team.  I mean, she will compliment Maroney perfectly, will she not?

As is my style, I kept a lid on any excitement I might have had.  They were half routines, and they were heavily assisted by Valeri.  But I mean, it was just podium training, so whatever.  Spot away, Pops.

Finally, we reached Nationals.  I refuse to call it Visa anything.  We knew this was showtime, because Nastia was planning to compete beam AND bars!  I could actually sense the salivation from artistry trolls through my computer screen.  Everyone, including myself with my cold, dead heart, was excited for this routine.


Like Stealing Candy from a Baby: Nastia Liukin Avenges Her Lost Gold Medal

As the papers were being sent to the printers, I pondered what I had seen.  No dismount, but GREAT lines.  The tkatchev seemed slightly less butt-scratchy, and her pak looked high and gorgeous, just like old times.  I watched it once, noticed something, so I watched it again.

Why does Valeri keep touching her?

Like, spot, sure, but this was touching.  Repeatedly.  Every time she went up over the high bar, he boosted her up there.  He pushes her into her gienger, and then catches her on her way down.  He lets her leave the high bar by herself, but her catches her on both sides at the end of her pak.  That's a lot of help for a session that is supposed  to imitate the competition. 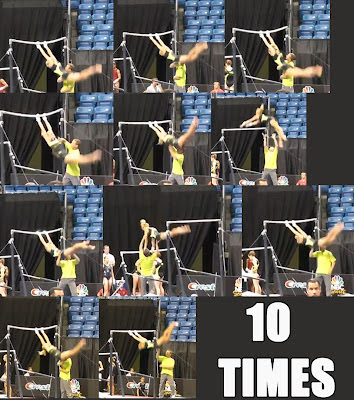 The internets were either largely unaware of these facts, or they chose not to care that Nastia still hadn't done a full routine without assistance.  Nastia Liukin was still on her way to Team and Uneven Bars gold!

Then another video came out.  What was this?  SWEET MERCIFUL CRAP.

It was the dismount.

Those who watched this glorious event  live could only audibly gasp-

-WHILE THE INTERNET FUCKING EXPLODED.

That dismount, it wasn't good.  It was SO MUCH BETTER than her previous best, which was good enough for a lowly AA Olympic Championship.

Suddenly, my entire Twitter feed was nothing, literally nothing, but Tweet after Tweet with either thoughts about The Dismount, or a link to the video in question.

While I was waiting for the word #dismount to trend, I thought to myself "He totally tapped her, right?"  He basically threw her up so that she could get enough height on the #dismount.  Well, with that kind of power, of course she could get the height she needed to not only make the skill, but to stick it cleanly.  #dismount.

I was not pleased.  I felt as though I had been fooled.  It wasn't so bad though, since apparently the ENTIRE PLANET (see above) was also fooled, they just didn't know it yet. They'd find out the next day.

That day was Day One of the Summer's Eve Championships.  Those in attendance say that the crowd was electric, and they were all waiting for one thing: Nastia Liukin's new super-routine, in full, complete with #dismount.  A good friend, we'll call her BoBo, noted that Nastia was STILL being assisted by Pops during the ONE TOUCH.  Now is the time to be doing routines on your own, one would think.

You guys, it's NASTIA.  Remember her?  The Olympic champion with all those years of experience?  Yeah, I think she can manage.  She's a fighter, a competitors.  Watch her rock this routine.

Nastia did not rock that routine.